Bottom of the Toolbox

July 24, 2020
Introduction
Every faction has its top performers and Bayou is no exception. When people think Bayou models like Brin, Gracie, Lucky Emissary, Bokors, Rami and Merris come to mind because they are very well balanced for point cost and what they do. Their power levels and they aren't necessarily reliant on other models to function at maximum capacity. They are the All Stars in the Bayou, but we're not talking about them today. For this article I want to look at the top of the bottom. To quote Mystery Men "we're the other guys."
Moon Shinobi

Alright. These dudes are Tri Chi.  So lets cover their strengths shall we? 6 stones is a fairly low cost. Stealth is always good.6 movement! Drunken Strength made people playing versus Shen Long crew a few months back. Squeal trigger is always a plus. Two inch engagement range. They have a heal on a bonus action and in a single activation they can hand out not 1, not 2 but 4 different conditions with the right cards.
Are they power house beaters who are going to clean up the enemy? nope. Are they high octane scheme runners? nope. Shinobi exist somewhere in the middle ground. They do suffer from 0" on their actual damaging attack and the attack itself doesn't do amazing damage but drunken strength + distracting themselves means they can hit straight flips pretty often. These are not minions you are charging up the board on turn 1 and taking down your opponent, but they will gum up the works long enough to get things done. 2 inch melee is very easy to under value until you have a model stunned, staggered, distracted and locked down. They won't go toe to toe with any beaters, but they can put a hurt on scheme and support models trying to escape.
Test Subjects
I think the main reason you don't see them is the models aren't out yet. We did see the renders and they are amazing. If you don't like them, why are you even playing Bayou? 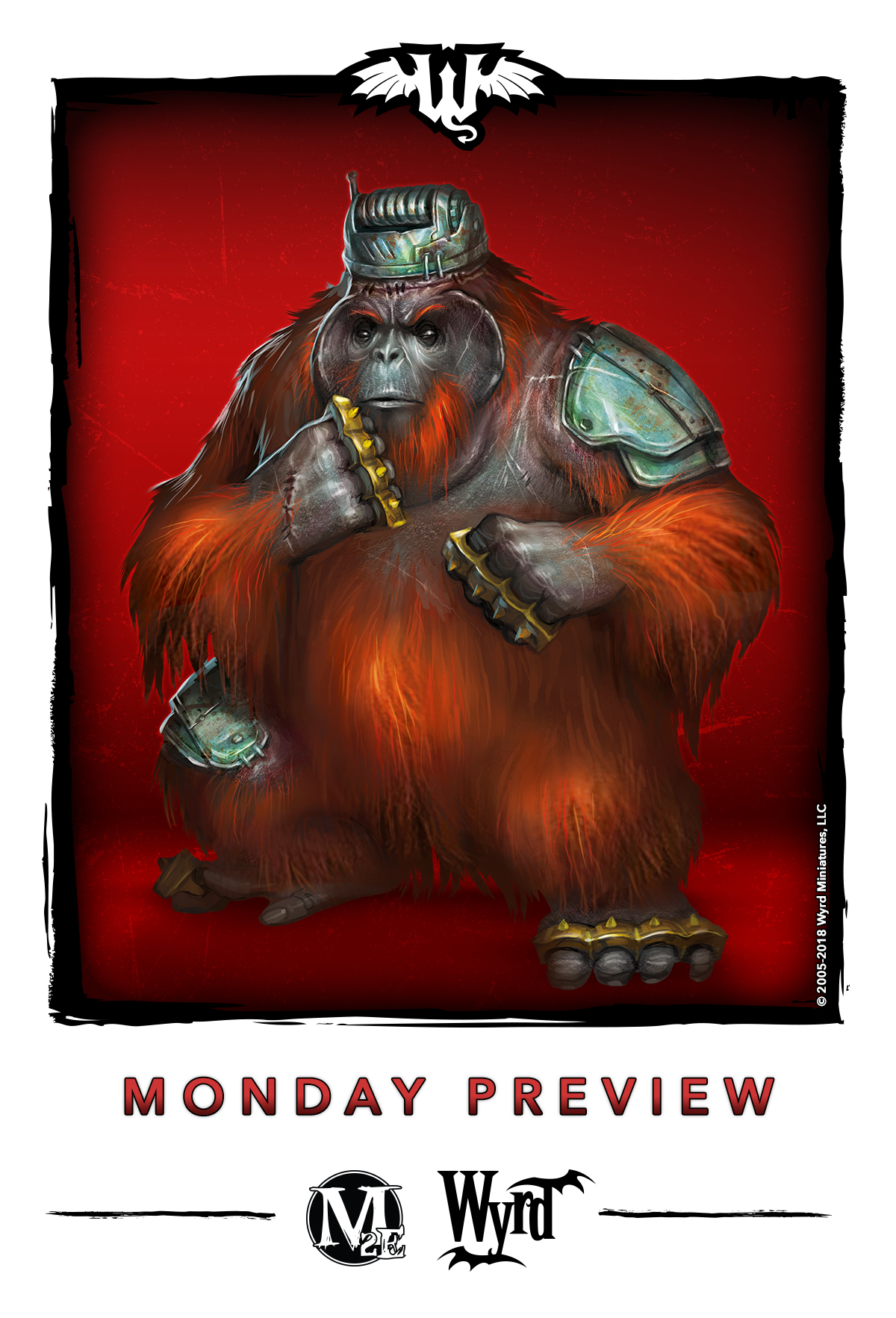 So why do I like them as odd takes? Well once upon a time you could game the system with them but errata fixed that, so let's just look at their stats. For 4, yes just 4, stones you get a 6 hit point armor 1 model that can't be executed or blown up. They have stampede and an ability that lets them charge when pushed ALONG with Scamper, meaning these guys are faster than you think and can get some surprising amounts of attacks. They get better stats when they are injured which is harder to set up but can be done. (Sammy LaCroix comes to mind. do 1 damage to them, draw a card from her aura,  bump their stats 1 and if she has the trigger its a free charge. )
Attack wise they don't bring a huge amount of play outside of a slow trigger, but their gun attack does have armor ignore and convulsions trigger.
The thing I truly love about the test subjects is that your opponent has to commit resources to removing them. They aren't gonna be one shot by most models. Its Actions your opponent is having to trade down for. Props if you make them even more annoying by putting 12 cups on them and making them even more of a threat.
Popcorn Turner
This guy is a steal for only 8 stones in my opinion. 6 move and on the move make him plenty fast for getting where you need him to be. Breath of Fire is a solid attack all the way around. Self heal with soulstone use and Triggers to turn that into poison to effectively give anyone that goes after him distracted. Popcorn can roll up a flank solo and get schemes done pretty effectively and set some models on fire as he does it. If you run him with a Moon Shinobi partner they can handle quite a bit on their own.
LaCroix Raiders

The box is coming soon!
Another model hampered by their lack of availability, Raiders are another solid cheap model for the Bayou that can fill multiple rolls. Their stat 4 gun is deceptive since they have The Bigger They Are and Easy Targets. Unimpeded, mv 5 and Risky Maneuver means they have solid mobility. Equality of Fate is just what the doctor ordered when you are playing crews that don't have access to as much card draw. Bring along a Porkchop and they are happy to have a free scrap to hold on to and draw cards from.
Wild Boars
This is where I see readers staring blankly at their screens for a second. Wild Boars are the often forgotten middle child of the pig growth line. They usually hit the board just in time to become War Pigs but let's take a moment to appreciate what they bring to the table. For 7 stones you get a move 6 unimpeded model. They have the Truffles ability which, even if you aren't playing Pigs is a free mv toward the boar. Turn 1 it can walk 6, go reckless and have two more models come to it for a 5. Then it becomes a reckless, stampeding pinball into your opponent's crew with eat your fill and tear off a bite triggers and when if you maneuver it to die in the right spot, you get a scheme marker. Is it a budget warpig? sure but at 7ss it doesn't get quite as big a target painted on its head. Plus if a model is in a bit of trouble, the Boar can tempt it with truffles and make it move away for a low card.
Conclusion
These are my top 5 surprise picks for your Bayou crews. Do yourself a favor, experiment and see what happens.  Some models simply don't perform on the table as they do in the lands of Theoryfaux. Feel free to comment with your own picks and if you have any ideas for content you'd like to see from the Breakdown, please let me know.
*All images are property of Wyrd Games

Popular posts from this blog

Back for the Loot!

September 16, 2021
Introduction Hello friends! I recognize that it has been a while since I dusted off this blog and created any content of my own. The past year and a half has been a wild ride for a lot of people and I have been remiss to write about one of my favorite subjects for a while now. With the addition of a brand new book for Malifaux and the advent of new titles, I felt it was time to stretch my typing fingers and get to back to work.  So everyone gets a new look and some new rules down in the Bayou! I know the boys in green don't get too much coverage on average so I thought I'd start us off with talking about the big boss himself. I want to cut through the card run through as quickly as I can though because he's already been covered in a great video reveal. What I'd like to discuss though is how Som'er and the other titles are going to change Bayou play. So if you are a Bayou player, stick around its gonna be fun. If you aren't a Bayou player, stick around anyway a
4 comments
Read more

December 24, 2020
Introduction Today's article is gonna delve back into general Malifaux tactics again so should be applicable for most everyone, not just Bayou Dwellers. This is a pretty indepth discussion but hopefully I can condense ideas to the point where they help you in the process. So one of the things Malifaux gets touted for is being a game that offers some of the best tactical decisions in a miniatures game. Every step of the game has some sort of space where decisions you as a player make effect the game in a large way. Often you hear players say "I lost because my deck hated me" or "I would have won if they hadn't included model X". The truth is, very often the mistake that cost the game happened at one of these key decision points in the game. These spots aren't always easy to recognize in the moment and when we get back to tourney play it can be a strain playing 3 or 4 games in a day to be aware of it all. Tournaments are the equivalent of a boxing match
Post a Comment
Read more

You Can Be A Big Pig Too!

October 04, 2021
Introduction Ulix's golden piglet has been a crowd favorite ever since it was introduced back in 2nd edition. Almost every Ulix player I've met has a piglet painted gold. Now we have Ulix Porkbelly Protector and the Golden Piglet has its time to shine. So what's new for Ulix and how has it changed the herds of pigs in the Bayou? Let's delve in Bigger Better Bacon Ulix's model is huge now, he's a whopping size 4 on a 50mm base. He's also got the Pig keyword which means he is effected by all the pig related bonuses, specifically the +1 melee range from the Whisperer and most important, the Go Hog Wild aura on Old Major. Ulix melee hits like a War Pig with 3/4/6 that you can pull burning from an enemy to give a positive to the attack flip, (and a pos from Go Hog Wild on damage) and Shove Aside and Tear Off a Bite Triggers to keep him alive.  He's also got an amazing bow that ignores friendly fire (Ulix players have been wanting this forever) and does 2/4/
1 comment
Read more